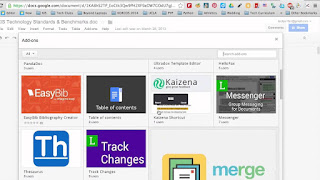 Recently, Google announced Android add-ons for Docs and Sheets. The new add-ons can be downloaded within Google Docs and Sheets, as well as applications that are found on the Google Play store. You'll be able to use these add-ons for things such as preparing a contract for e-signing or to pull CRM data into the spreadsheet you're working on.

Google has worked with a number of partners for the first set of add-ons. For example, you'll be able to complete a signing process in Sheets or Docs by using the add-on DocuSign. Another add-on, ProsperWorks, will let you pull CRM data into your sheets. AppSheet will let you use data in sheets to create mobile apps, while Scanbot will allow you to scan documents using OCR.

Those who want to access the add-ons can do so from add-on menus in Google Docs and Sheets on mobile. This is in addition to Google Play.

For years, add-ons have been common to software programs for desktop computers. It's also worth mentioning that Google has a large list of third-party plugins that can be used with Google Drive and Google Apps. However, more and more people are using their phones to access office programs and this is one of the reasons Google has taken this mobile approach, which is the first time it has done so.

Supported Android Add-ons can be found in Google Play, but the chances are more partners will be brought into the mix, so expect the list to expand in the near future.

Posted by FastSwings.com at 1:09 PM