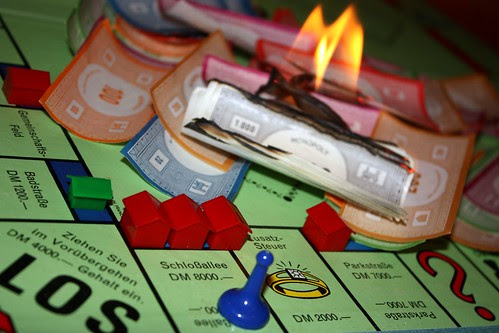 2012 began with a stark warning issued by the World Bank. In its six month review of the global economy published in January, the Washington based institution advised governments to make preparations and contingency plans for an economic downturn similar to that experienced in 2008-09. Andrew Burns, the report’s author, stated that an “escalation of the crisis would spare no one”.
The fear of a double dip recession has not abated, with the worsening eurozone crisis increasing concerns around the world. In the twelve years spanning from 2000-12, there occurred the ten largest bankruptcies in world history. These monumental financial events have become key points on the grave road to our current global economic situation.
Intro image courtesy of alles-schlumpf

The huge US mortgage lender was felled by the devastating combination of the credit crunch and US housing crash. Valued at $36.5 billion when it filed for Chapter 11 in May 2009, Thornburg Mortgage was unable to recover. Forced into liquidation, the company no longer exists and its remaining assets are still being sold to meet the claims of its numerous creditors and equity holders.

The Detroit automobile manufacturer is an American engineering icon. Nevertheless, when it showed signs of toppling, which would have made an enormous workforce redundant, President Obama stepped in and ordered Chrysler to file for bankruptcy in April 2009. The company was placed in the hands of the United Automobile Workers. Valued at $39.3 billion when it filed Chapter 11, the company has thankfully since recovered.

Filing for bankruptcy in Oct 2011, while valued at $41 billion, blame for the plight of US brokers MF Global was laid firmly on the debt crisis in the Eurozone, which, of course, has taken a series of dramatic twists in recent weeks. A grand scale investigation is ongoing to look into reasons why approximately $1 billion of customer’s money, which should have been separate from the firm’s, is missing without a trace.

The large US financial firm is a notable example of what can occur when a strategy of too eager and rapid acquisition comes undone. Filing for Chapter 11 in 2002, while valued at $61.4 billion, it was Conseco’s aggressive acquisition of firms throughout the ‘90s, which included Green Tree Financial, the largest US lender to mobile-home buyers, which caused it to succumb to immense debts. Conseco has now recovered.

The Enron scandal has come to symbolise our current epoch of corporate greed and unscrupulousness in the same way the Watergate scandal symbolised the epoch of political underhandedness, paranoia and corruption in the 1970s. The exposing of Enron’s fraudulent accounting activity led to it filing for bankruptcy in 2001, while valued at $65.5 billion, and the dissolution of auditing giant Arthur Andersen. Enron was liquidated.

Fortunately saved by a TARP bailout just 38 days after filing for bankruptcy in November 2009, while valued at $80.4 billion, the CIT Group is another notable example of what can happen when a commercial lender over expands their portfolio, without adequately heeding the warning signs of an ailing economy and impending credit crunch.

The world gasped when another icon of American engineering filed for bankruptcy in June 2009. At the time General Motors was valued at $91 billion, but a crushing sales slump during the recession and the overwhelming financial crash of 2008-9 forced the automobile manufacturers into a downward spiral from which only a government bailout could save them.

It was extremely ironic that the telecommunications monolith WorldCom, which specialises in PR, should suffer such a reputation damaging disaster when they were forced to file for bankruptcy in July 2002, while valued at $103.9 billion. Charged with accounting and executive malpractice (not surprising given that they had joined with Enron) CEO Bernie Ebbers was sent to jail. WorldCom was eventually bought out by Verizon.

Filing for Chapter 11 in September 2008, while valued at $327.9 million, the Washington Mutual disaster came hot on the heels of the collapse of Lehman Brothers during the financial crash of 2008-9. JPMorgan Chase immediately bought out the banking operations of Washington Mutual when it succumbed to its immense losses. The fall of Washington Mutual is the largest bank failure in US history.

The seismic shockwaves sent out when Lehman Brothers, then the fourth largest investment bank in the US, filed for bankruptcy in 2008, while valued at $691 billion, are still being felt today. The government refused a bailout and the financial market entered a period of marked instability, now referred to as the “perfect storm” or “panic of 2008”. The collapse of Lehman Brothers was the largest bankruptcy in US history and the investment bank was subsequently liquidated.
"Bankruptcies that Shook the World" was brought to you by the finance enthusiasts at IronFX, providing quality forex trading services.

Posted by FastSwings.com at 9:44 AM